Last year some time I announced that there was a possibility we may have a group buy on Wenger SwissGrips, but little came from it after the initial announcement.  SOSAK members were interested, and rightly so, but for one reason or another, we kept hitting dead ends with it.  It was worth the wait though as the SwissGrip is now finally available to SOSAK members!

Given the number of newly designer plier models, it should come as no surprise for SOSAK members that the SwissGrip is likely to be discontinued, so this may be the last opportunity to get them.  As with all the older, flat scaled Ranger models, the SwissGrip is making way for the newer Evolution scaled models.

For those members who may be unfamiliar with the SwissGrip, it was a large plier tool based on the 120mm Ranger series.  Unlike Leatherman or many other type folding plier tools, the plier head was fixed into place and did not retract or fold into the handle making for a very large, very bulky tool.  Of course, the lack of pivots and extra moving parts made this also the most robust and indestructible tool available as well, perfect for the heavy user who needed a reliable tool that could be constantly abused without fear of failure.

There were four variants of the SwissGrip available, although only the most common one will be available through our group purchase.   Two scale options were offered, red and black, and models were available with either a corkscrew or a phillips driver on the back side.  The models offered to SOSAK members will be black scaled models with phillips.

Even an older model like this one showcases Wenger’s dedication to innovation- in addition to the standard type tools like a large, locking clip pointed blade, file, screwdriver, cap lifter and saw, it also has a handy bit adaptor  that allows the use of standard ¼” hex screwdriver bits, allowing the user to carry whatever bits they use the most.  The adaptor slips over the end of the flathead screwdriver, allowing a significant amount of reach not available on most other multitools.  The bits and adaptor also ride in convenient pockets stitched into the sheath so they are always handy without the added bulk of a regular bit kit.  In addition to the adaptor, the hex bits also fit into a slot cut in the scale so that additional torque can be applied with the main tool being used in a T handle configuration.  You get the best of both worlds with the SwissGrip! 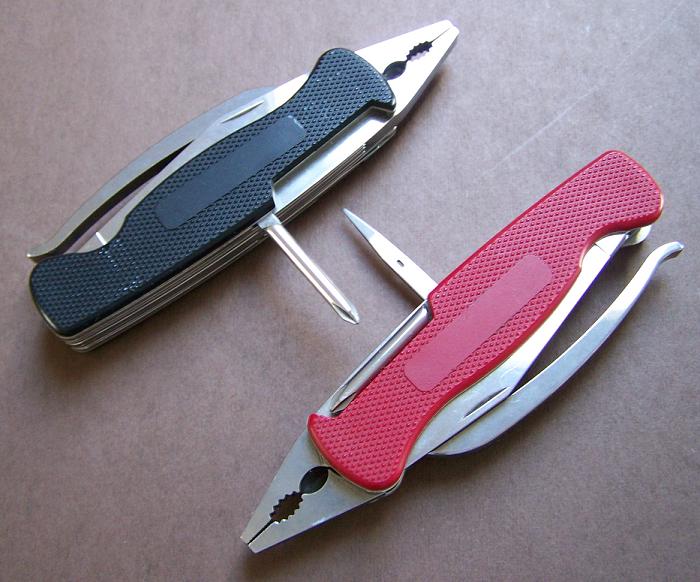 As anyone who has read my ramblings and reviews at www.Multitool.org has seen, I am a big fan of the SwissGrip, and I don’t mind the extra size and bulk- and I do mean size and bulk.  According to the Comparative Multitool Weight Chart we see that the SwissGrip weighs in at 301.4g (10.63oz) without the sheath and bits!  And, remember that the frame of the tool itself is 120mm- the plier head extends that by a significant margin and the handle adds to the width.

If you should decide that the bulk is worth it to you, or you just want to have a fantastic piece of Wenger History, before it becomes history, please contact Tim at This email address is being protected from spambots. You need JavaScript enabled to view it. to place your order.  This one time purchase price will be $85 US dollars, far shy of it’s suggested list price which was originally well over $100.

Contact Tim at This email address is being protected from spambots. You need JavaScript enabled to view it. for purchasing info!