Some of you noticed that there were no ALOX articles last month- the first time in quite a while that some ALOX model or another hasn’t been shown off! Well, for those of you who didn’t get your fix last month, here’s enough ALOX to hold you for a bit!

You can imagine my surprise when I opened the box this month and found not one, not two but a whole pile of goodies in here! 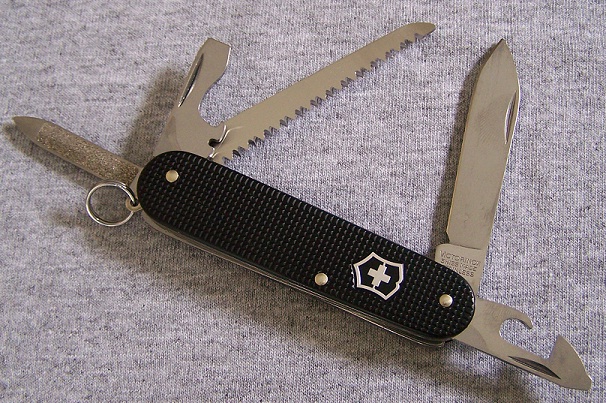 First up is a black scaled Cadet model- or what appears to be a Cadet at first glance until you see the third layer! Yes, in addition to the usual can opener, bottle opener, main blade and nail file this model has a saw in the middle, similar to a Farmer, only on an 84mm frame! While I may not be a big fan of the 84mm saw (no length means short draw, which equates to limited function) I am a big fan of having the third layer, which helps this little knife fit the hand better- not that this little collectible will see my EDC rotation!

Next up is a virtual opposite of the black scaled Cadet- instead of polished implements and black scales, this Mini Farmer has natural silver ALOX scales and black coated tools. Built on the same 84mm frame and including most of the same implements, this one swaps the nail file above for a small blade. Farmer fans will probably point out that a real Farmer has an awl, not a small blade, but since there isn’t an 84mm awl, you’ll have to take the small blade and enjoy it! 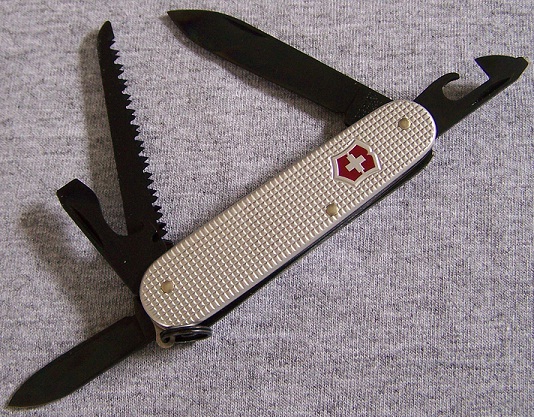 Third in the pile is the Sailor, continuing in the Nautical theme started with the Midshipman and Sea Pioneer. The Sailor is another revived discontinued model, and this version features blue anodized scales, old style cross, “Sailor” printed on it, and inside features a wood saw, main blade and marlin spike.

Very similar to the Sailor is the Seaman, which also has the blue anodized scales, old cross and nameplate- the only difference is that the Seaman has only a single backspring that holds the marlin spike and main blade. 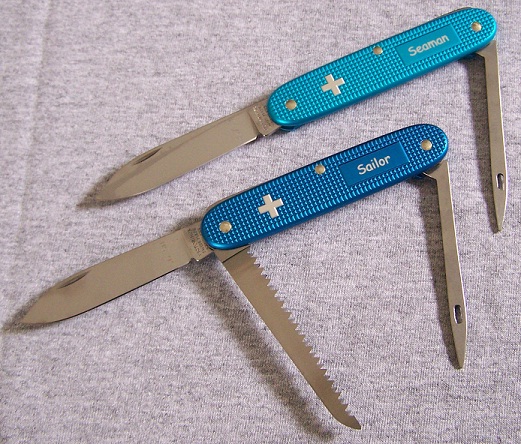 The only Wenger in the package is another interesting special. It’s a Standard Issue, or Soldat, as Wenger calls the ALOX issue knife, and there doesn’t appear to be anything special about it at first glance. Like most of the current SI’s, this one has no date stamp, but when you open the main blade you see what makes this one interesting- etched on the main blade is “1961-2011” pointing out that this is a 50th Anniversary Edition. Subtle and classy, just as we expect from Wenger! 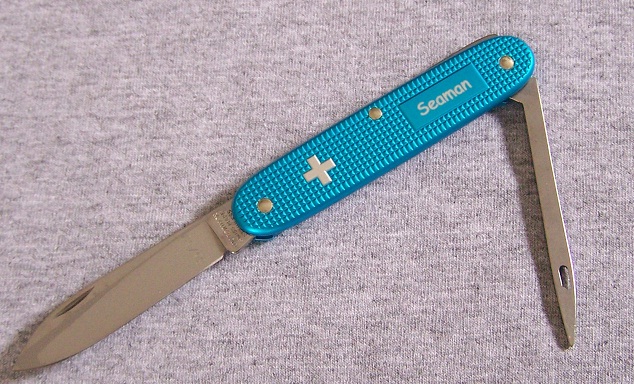 Last but not least is perhaps one of the most curious ALOX models that have been done- and that’s a major undertaking considering how many eye catching SAKs that have been produced in the last year or so! This one, called the Solo Electrician is built on the 91mm platform like the Farmer, Pioneer, Soldier and so on, but one scale is anodized in black and the other is yellow with a black lightning bolt/arrow graphic on it. Even more curious, it has only a single blade inside it, but instead of a standard blade this one features an electrician’s blade. Whatever the thought behind this one, it is indeed unique and therefore of interest to a hardcore collector like Yours Truly!

That’s it for the ALOX fix this month- for you die hards I hope it makes up for the lack of shiny SAKs last month!