Well it’s been over a year since I first looked at Victorinox’ entry into the LED market, and I thought it might be time for an update.  In addition to just talking about how I’ve gotten on in the past year with the 2xAA light I reviewed last year in the LED Shootout, I will also be looking at the 2xAAA light that I got with the new OHT, as seen last month.

Starting with old business, I have been carrying the 2xAA model on and off for the last year and it has become one of my “go to” lights for dog walking or any other flashlight jobs.  I tend to use it or my Gerber Infinity Ultra for almost every situation nowadays.  The Gerber isn’t nearly as bright as the Vic 2xAA, but it is much more compact, has an instant on feature in the tail and also features a pocket clip- otherwise the Vic 2xAA would be in my pocket all the time!

I am not terribly well versed in names and types of LEDs, nor do I know a Lumen from Chevy Lumina, but even I can see that the Victorinox LED is somewhat brighter than the Gerber, as the beam shot pictures show.  They are taken at about three feet which I think is about standard for beam shots.  That’s what I normally do anyway- again, I’m no expert!

The 2xAA has been a very reliable light for me in the time I have carried it.  It has gotten wet, gotten frozen, been dropped and abused in all sorts of different ways and it has not only held up to all of that, it still looks (almost) brand new.

All of that makes me quite confident about the newest addition to the stable, the 2xAAA that came with the OHT set.  It is pretty well the same light, only scaled down for AAA batteries instead of AA batteries.  One major change though is that the knurled metal body of the 2xAA light has been replaced with a textured rubber, which I can see as being a big improvement in cold weather.  The knurled grip on the 2xAA light was more than adequate, providing a more secure grip than the texturing on MiniMags, but I think the rubber may be an even greater improvement yet.  It’s probably somewhat cheaper to manufacture as well, so that is likely a big bonus for Victorinox too.

The 2xAAA isn’t as bright as the larger 2xAA light, but that likely has more to do with battery power and voltage and all kinds of other things I don’t understand.  It is however brighter than the Gerber Infinity Ultra that was mentioned above, and significantly brighter than the 2xAAA Mag lights it has replaced in my house.  I don’t know if there was a conversion kit offered for the 2xAAA Mags, but even if there is, I doubt I would bother to get one at this point. 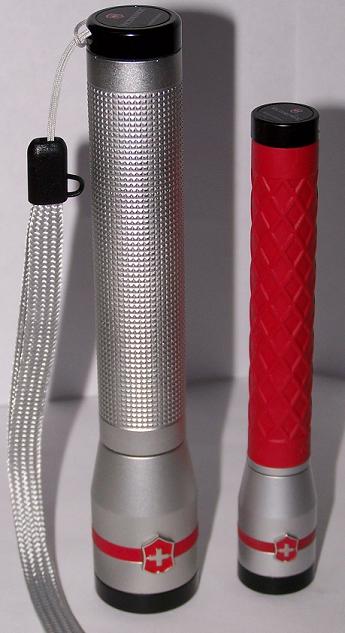 Overall I’d say Victorinox has scored another victory with their LED flashlights, both in style, function and longevity.  If the fancy silver body with red trim isn’t your cup of tea then contact Felinevet about getting one of these in a black finish.  Either way, I’d say these lights are very good for the money, and it might just be the last flashlight you ever buy!