By now any SAK enthusiast should be well aware of the fantastic warranty service both companies offer, but what if someone you know only has one SAK and needs to get it serviced, and can't live without it?


There are a few options available- either they find some way to survive without a SAK for a few weeks, they buy another one to tide them over, they borrow one from a SOSAK member to carry/use until theirs comes back, or they keep carrying it until it is completely dead. 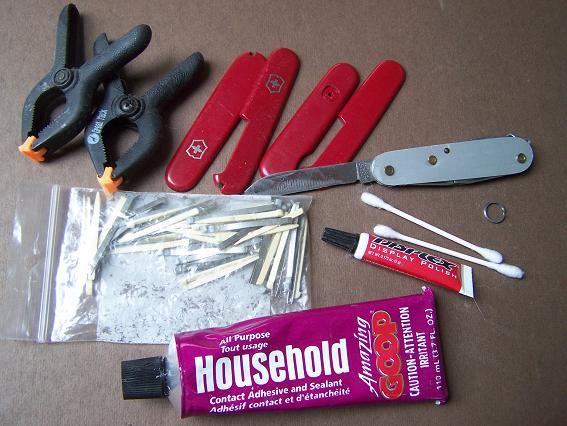 This pile of parts will fix almost all general SAK problems- SAK users can solve their own problems!
Anyone who carries a SAK (or multitool, or a pocket knife etc) knows that you always need them the moment you don't have them with you, and that it's very difficult to go without one when you are used to solving problems on the fly.  In fact, it can be downright frustrating to not have it with you when you are so used to doing things like cutting off loose threads, picking your teeth or filing your nails when you normally do these things without thinking.

Still, there's always another option- have a number of spare parts handy to quickly help someone out.  Rotokid is now stocking some spare parts bins that I think are a great item for any collector to have around the house, but I used some parts that I had left over from a number of old SAKs that I got for modding or for donors.  This has left me a number of old toothpicks, tweezers, keyrings, some scales and a few other parts that often get destroyed, damaged or just grungy beyond reckoning.

The latest patient to come across my desk was a Victorinox Handyman that one of my wife's co workers found on a beach in Cuba, and has carried/used faithfully ever since.  From what I gather, this knife had seen some significant use before it was lost (and eventually found!) and so it was ripe for a makeover!

The scales were actually in decent shape, but the tweezers had been lost and replaced with tweezers scavenged from a knockoff, and the toothpick looked like it had been used on a crocodile.  The keyring had been replaced with one from a knockoff as well.  When I pointed these things out to my wife she wondered what the difference was- my poor, innocent wife just didn't get it, so I had to demonstrate!  I looped some heavy string through the keyring and gave a quick tug which sent pieces of the cheap split ring all over the place, never to be seen again!  I just smiled as she rolled her eyes at how pathetic I was that I took joy in such a demonstration!  I tried to explain to her that this might have been how this knife was lost in the first place, but she had already moved on to more important things- I think it was CSI Miami....

In addition to replacing some worn parts, adding in an eyeglass screwdriver, cleaning the joints and polishing the scales, I also prepared a little write up for the proud owner so he would know as much as possible about his knife, complete with links to SOSAKOnline, SAKWiki and Victorinox's homepage, so he can learn about his Handyman.

I'm sure this won't be the last I see of this particular Handyman- the scissor spring also needed replacing, but I didn't have any spares, and he's also considering placing an order with Felinevet's Shop for a new sheath so he doesn't have to worry about losing it out of the cheap nylon webbing pouch he is currently using.

Total turn around time was 16 hours, faster perhaps then Victorinox, but I doubt it was as good a job as Vic's warranty department does.  Still, for minor problems it beats mailing the knife in, and as there were no structural problems with it I am sure Vic won't be too upset that I saved them at least one repair job!