On The Road With Victorinox

While at SHOT this year we got to have a good look inside and around a Victorinox Edition Airstream and I have to say I was blown away.  As a child we used to go camping a lot, and while we may not have had piles of money laying around, we did have a small camping trailer- a Prowler, for those who are familiar with such things.  I remember just about everyone in the campground would stare wide eyed at and Airstreams that cruised by on their way to the "good" campsites, with the sewage and electrical hookups, while we were all left to run off our batteries or generators. 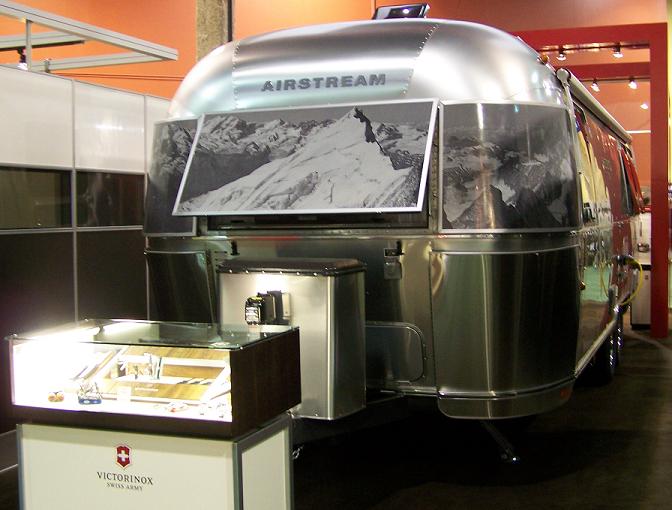 The Airstream was more than just an expensive trailer- it was a marvel of the most modern technology at the time.  I remember models in the 70's that had built in microwaves, in a time when many houses didn't have microwaves, which may seem odd to many younger readers, but Airstreams were quite simply the cream of the crop.

According to Victorinox, the story of the Vic Airstreams almost came about by accident- they wanted to run a national tour to show off new products and generally create more interest (or rekindle waning interest) in Victorinox products, and were looking for a suitable vehicle for the endeavor.  One day someone from Victorinox happened to be talking about it with a friend of his, who happened to be someone from Airstream, and the rest pretty well just fell into both their laps, almost like the old chocolate and peanut butter commercials!

If you get the chance and live in or near one of these cities, I strongly suggest that you take the opportunity to go and have a look at the Victorinox Edition Airstream, as well as the new products offered by Victorinox!

Your Companion for Life On the Road

Festival in the Park – Charlotte, NC

This info was provided to me from Victorinox, so that everyone can have the opportunity to plan out a visit with them.  If you should get the opportunity, make sure to mention you are a SOSAK member- it probably won't get you much, but I'm sure the rep you talk to will get a chuckle out of it!

I have more photos of the inside of this amazing trailer, but I think you will find the information and photos available on the official Airstream Site to be much more compelling!