From time to time I like to look at knockoffs, copies and similar “Swiss Army Style” knives, and this month I’d like to look at another, although this time with a bit of a twist.  As someone with an odd name (Grant is more popular here as a last name than a first) I was always disappointed growing up seeing more common names (such as my brother Kenneth) on stickers, keychains, shirts and other mass produced items.  In the late 70’s and early 80’s it seemed that everyone had their name on pretty well any product imaginable but it was pretty well impossible to find anything with my name on it.  Needless to say, I was amazed on the few instances when I did find my name pre-printed on something, and I didn’t have to get it custom made. 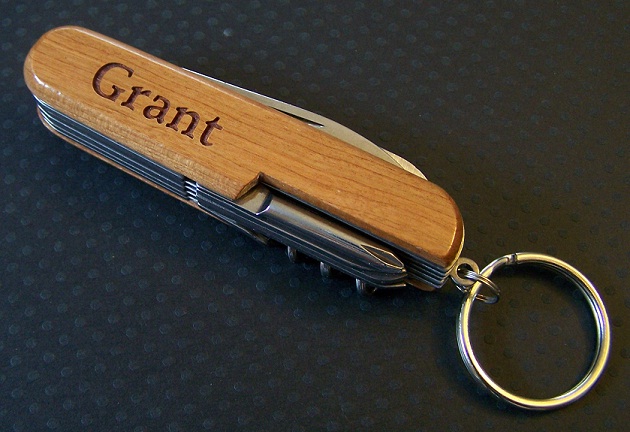 With that in mind, my wife recently happened to be in a small tourist trap type store with her mother and she came across something that she thought was the perfect gift.  She rarely, if ever buys Swiss Army (or indeed any kind) knives for me as my collection is quite vast and she has no idea what I want, what I need, what I have and so on, but when she saw this Swiss Army Style knife with my name on it, well, she couldn’t believe her eyes! 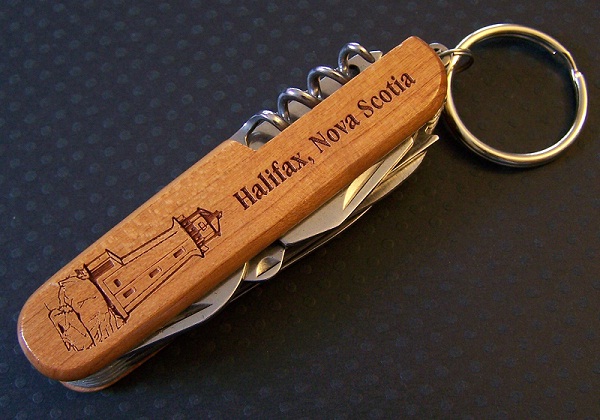 She of course teased me on the phone with “I have the perfect gift for you but I’m not telling you what it is until I get home” and I wondered what it might be.  Usually my wife is horrid at keeping secrets, and indeed wants to give gifts as soon as possible, so I was somewhat surprised and knew she had to have found something interesting. 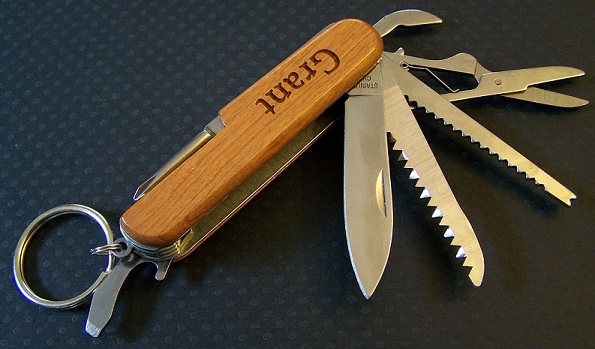 When she finally got home she handed me this knife, which, when I looked at it had my name on it!  Since I’d never actually seen this before I’d assumed the store had some small cnc type router there where you pay a couple of bucks and they print your name on it, but it seemed that wasn’t the case- here was an actual item, offered for sale and kept in stock with my name on it- literally!  On the opposite side is a relief of a lighthouse and the words “Halifax, Nova Scotia” which for those who may not know, is the city I live in.

The knife itself features a large blade, wood saw, fish scaler, scissors, can and bottle openers and on the flip side a corkscrew, nail file, awl, sewing punch and Phillips screwdriver, although as well outfitted as it seems to be, it’s not something I’d ever consider using!  It will live on in my collection as the knockoff I am most proud of, although to be honest, it doesn’t have a lot of contenders in that category!