Some time ago I looked at all the new products that Wenger has produced in the last couple of years, and how I really couldn’t see what was coming next.  Well, I was right about one thing- they aren’t riding on their past accomplishments one bit.  They are continuing to move forward, and in a very impressive fashion.

The main product I had gone to see was the new 1893 Reissue that I first heard about and reported on in January.  For those who didn’t know, the reissue knife is a hand made recreation of the first knife that Wenger provided to the Swiss Military for the soldiers.  I could go through the particulars, but instead I have a special guest presenter, Mr Peter Hug, CEO of Wenger SA, who graciously agreed to make a special presentation exclusively for SOSAK members!

Peter Hug and Dennis Piretra, Marketing Manager for Wenger`s North American operations presented the first 1893 Reissue to the head of the National Shooting Sports Foundation (NSSF), the organization for putting on the SHOT Show every year in a public ceremony.  I made sure to film it as well because I felt SOSAK members would want to see it.  This knife is indeed a big deal, as NSSF president Doug Painter plainly shows with his appreciation!

The Reissue model wasn’t the only crowd pleaser at the show this year.  As mentioned in the BLOG and in a SAKtivity photo, Wenger will soon be offering an ergonomic pocket clip on four new Ranger models, the 151, 51, 53 and 61.  These models will still be available without the pocket clip for folks that aren’t interested in them, but even those folks may want to consider checking out at least one since the clips are removable.

Also, Wenger introduced a few variations to their 85mm (standard size) line.  The new Soft Touch scales and a yellow EVOGrip model are featured in their own articles this month, so I won’t say much about them here.  I have one of each, and let me tell you, they are really nice!  Just ask Tim what he thinks of the Soft Touch scales and you’ll get an idea of how great they are!

The International Swiss Gang! L-R: Peter Hug (Wenger SA), Giaziano Bruno (Swiss Peak), Daniel Oehy (Swiss Peak) and Alpenhorn player William Hopson
While I was at the SHOT Show and had the undivided attention of the powers that be at Wenger, I also took the opportunity to ask the hard questions, such as what was new on the horizon, and what we could expect in the future of the military issue knives.  Neither of them would hint at what’s next, but judging by the grins they exchanged when I asked, it should be interesting!  The other big question, well it wasn’t a rehearsed response, but you can tell that there was something there.  Fortunately, I had my recorder going at the time!

I’m really thrilled with all of the new announcements, and meeting some of the major players at Wenger face to face really made me feel confident with the company’s future.  Not that there was any doubt with their recent streak of new and interesting designs- they certainly are headed in the right direction!

I'd also like to extend a thank you to Dennis and Peter and indeed everyone at Wenger for helping to make all this possible for SOSAK members, and for being so gracious to me all weekend!  They were very patient, happy to help and answer the questions that I am certain they were dreading hearing, and putting up with me with smiles on their faces, and for allowing us to conduct "SOSAK business" in the private rooms in the Wenger booth! 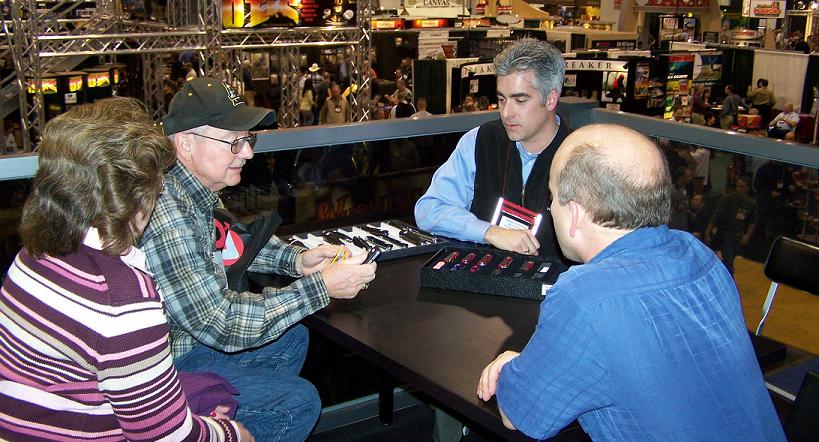