I’ve wanted to write this one for a while now- ever since I won this model on EDCSource from the great Hive Of SAKtivity.  If ever there was a Rolls Royce of Swiss Army knives, the Wenger Cigar cutter would be it- it’s elegant, robust and yet refined and designed for the great pleasures of life. 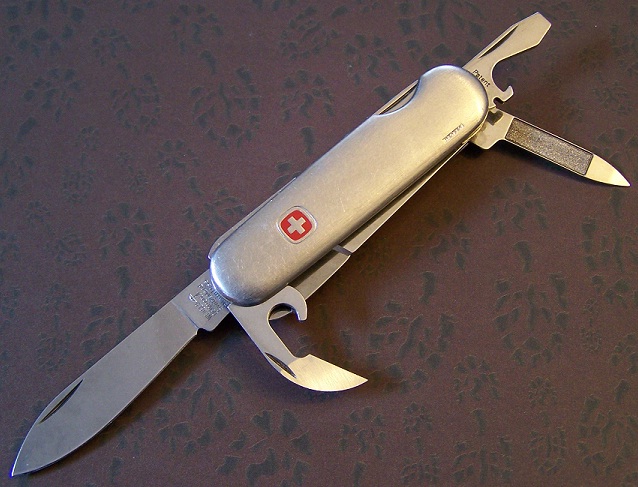 If anyone is offended by smoking, now is a good time to stop reading- unless of course you didn’t think I was going to properly review a SAK without testing it properly, you probably shouldn’t have started reading this article!  Now I am not usually a smoker, and I don’t recommend you take it up if you don’t smoke, but I do enjoy the odd cigar from time to time- fairly rarely actually, which is why it’s taken me several months to properly write about this one. 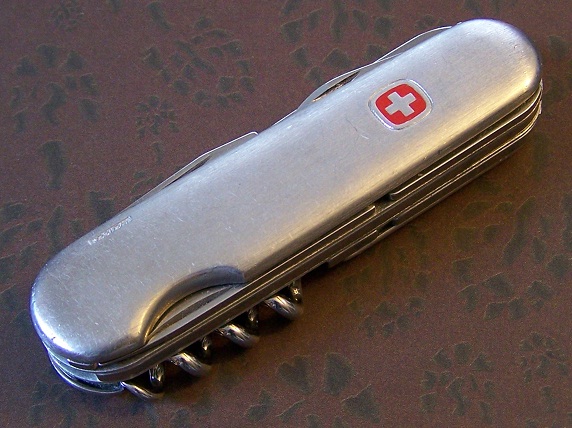 On the surface it’s a beautiful knife in its own right, with polished stainless steel scales that contribute to the robust feel and general heft of this knife- it’s built as solid as a knife can be built, and has the weight to prove it.  At a whopping 3.3oz (94g) this is perhaps the heaviest three layer, 85mm SAK in my collection. 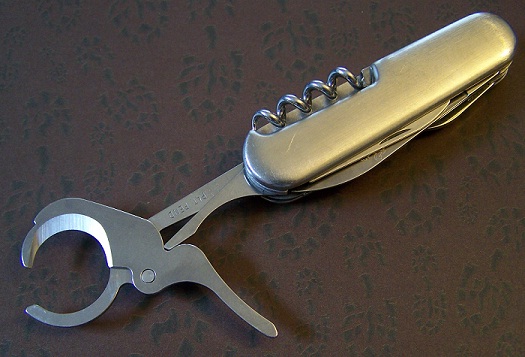 Tucked away inside this beauty is the usual can opener, bottle opener, large blade and nail file typical of Wenger 85mm models, but the main difference is the oversized scissor type tool in the center.  Instead of straight blades as on scissors though, this tool features a large circular set of blades, ideal for precisely cutting a nice cigar- although I have only so far managed to test it on a Cuban, I am certain it will work just as well on others.

On the back side is the standard awl and corkscrew- the corkscrew is ideal for this model as few things go as well with a fine cigar as a good Merlot or Cabernet blend or single malt scotch.  While the scotch is pretty easy to get into, you’ll want a good corkscrew when it’s time to open a good full bodied red wine.  As if to encourage this idea, my example has a Seagrams crest etched on the main blade- Seagrams of course being a Montreal, Canada based distillery, which means this Swiss knife, purchased from a seller in the United Kingdom while sporting the logo of a Canadian Company has finally come home again after some extensive travel!

While this knife is missing a few typical Swiss Army features like a lanyard ring, toothpick or tweezers, I think this knife is not meant for, or suitable to an Every Day Carry type lifestyle, unless of course fine wines and finer cigars are major parts of your day to day activities!  Maybe someday I’ll get there, but for now I will just reserve this knife for special occasions, just like my cigar habit is!